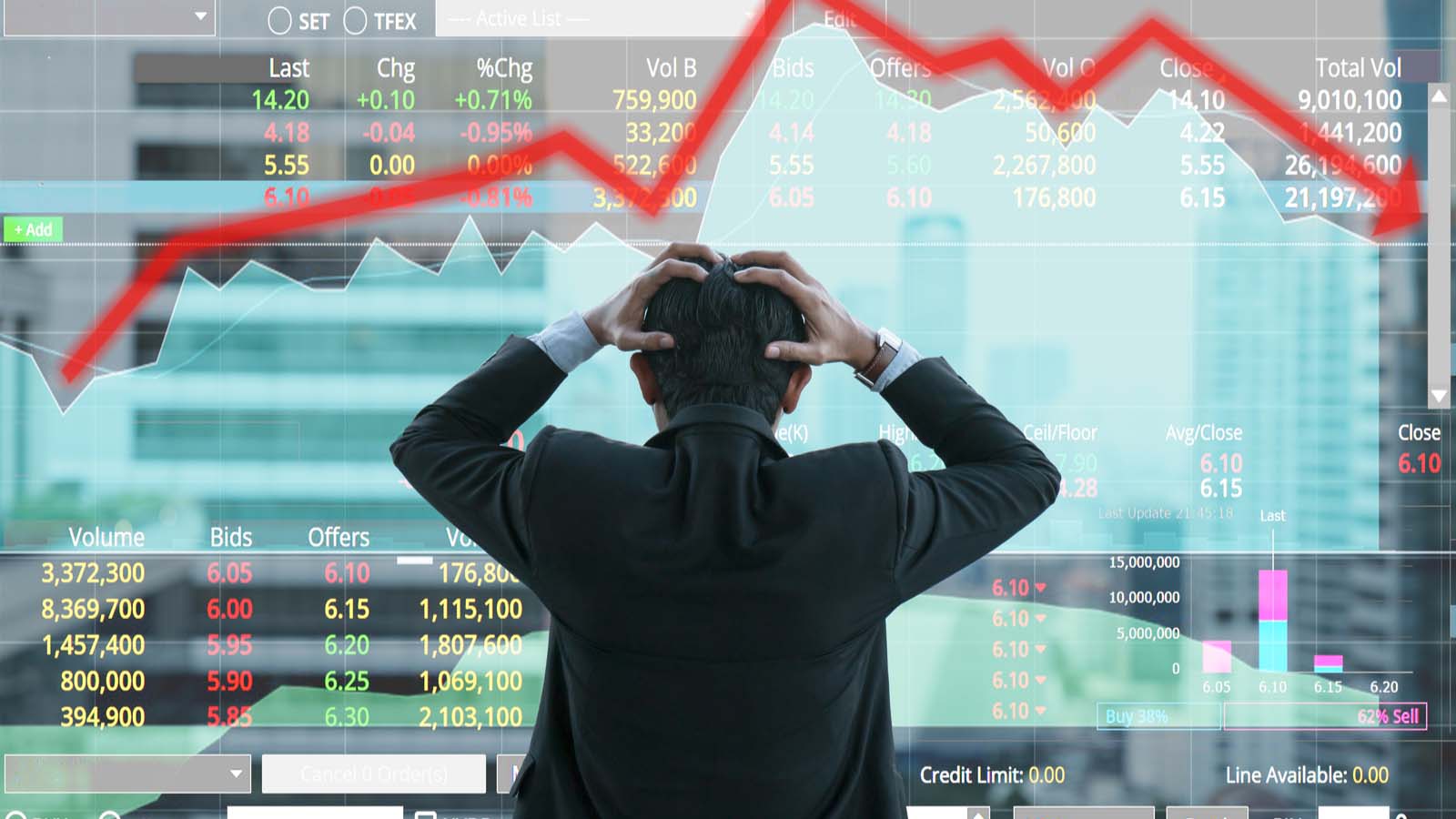 It’s never fun to focus on stocks that could crash — and, in this case, I’m not talking about a minor correction here. Instead, I’m talking huge volatility: 20% down or more.

By now, you’ve heard about the “10X culture.” This isn’t just about your portfolio. Rather, you see advertisements everywhere about 10X-ing your income, your personality, your love life and other things that I don’t think are possible to 10X. Don’t quote me on this, but I believe the 10X thing came from marketing guru Grant Cardone — a person you don’t want to criticize or you might die.

And that’s the point.

Americans are optimistic, so they don’t want to talk about stocks that could crash. Arguably most are not in the mood to learn about how they could profit from the red ink. To them, that’s about as patriotic as singing the Chinese national anthem before the World Series.

But in reality, bullish and bearish price action is a necessary component of a healthy market. Otherwise, you get remarkable boom-bust cycles. That’s why it’s important to be regular. However, the market is — arguably — not regular. There’s a real risk that stocks that could crash bigly.

Another oddity about discussions of volatility is that so-called “permabears” love picking up discounts with their “diamond hands.” But on the same token, it’s wrong to talk about possibly upcoming discounts. It’s a tough crowd. However, someone has to take one for the team. Here are my ideas about stocks that could crash 20% or more:

Before we dive in, please don’t pull a Tom Brady and pin this article as if I have a strong conviction on these “negative” ideas. I don’t hate these companies. Many of them run a fine business. But I think we need to be reasonable — this is about rationality and mitigating the dangers of buying into overexuberance. With that caveat out of the way, here are seven stocks that could crash in the months ahead.

Stocks That Could Crash: Novavax (NVAX)

Novavax is a tough one. During the worst of the novel coronavirus pandemic, the company’s subunit vaccine — a proven platform underlining the hepatitis B vaccine — appeared very compelling.

Sure, the messenger-RNA-based vaccines had superior manufacturing speed, but they were also unproven, with nucleic-acid vaccines not gaining approval from the Food and Drug Administration (FDA) prior to their emergency use authorization.

Further, NVAX stock has been a top performer. Over the trailing year, shares have rocketed up gains of over 2,800%. If you bet early on Novavax — but not too early — you’re a happy camper. But that’s also the point. Looking at its historical boom-bust cycles, this is definitely one of the stocks that could crash 20% or more.

As a reminder, I don’t hate Novavax. I’ve spoken positively about it in prior articles. However, with new Covid-19 cases declining sharply from their peak, it’s hard for me to imagine that investors will keep bidding up NVAX stock. Maybe they will, but the distracting element is that we’re not seeing too much high volume at these elevated prices. This suggests a strong bag-holding risk.

Let me acknowledge upfront that betting against the Reddit investing community better known as r/wallstreetbets (WSB) is very hazardous. I would know. Headphone manufacturer Koss is giving me headaches.

A few weeks ago on Feb. 22, I stated that the narrative for KOSS stock was more interesting than the shares themselves. I was wrong.

While I contend that the narrative is indeed intriguing, KOSS more than doubled since the price on publication day. Even if I didn’t like a company I was investing in, I’d take a 2X increase — who wouldn’t?

But I haven’t backed off from my skepticism, which is why the company is on this list of stocks that could crash 20% or more. From the time of writing price, such a correction would bring KOSS stock down to $22 and some change. That’s still well above the 50-day moving average, which is sitting at $15.53.

Moreover, members of the Koss family have taken the opportunity to cash out, which I think is all sorts of ironic. If you want to gamble, that’s on you. But this speculation is way too rich for my blood.

One of the reasons I don’t like discussing topics like stocks that could crash 20% too often is that, aside from the drama such headlines engender, they could go badly against you. As you know, some short-selling hedge funds learned that the hard way. And no, I’m not shedding any tears for them.

But with Express, I have a bit more confidence in my bearish outlook. From what I can tell, EXPR stock has enjoyed some form of a social media following. If so, it makes sense under this particular context. There’s a certain joy of going contrarian to the extreme and ruining some Wall Street fat cat’s day.

However, I think the pessimists have a better fundamental take on EXPR stock. Primarily, millennials don’t care about branded fashion as prior generations of young consumers did. Prior to the pandemic, many discretionary luxury retailers faced a rethink on how to win back young consumers.

Secondly, EXPR has been on a downtrend in large part because of shifting millennial consumer trends. But a pandemic of all things is supposed to make them care about branded fashion? I find that hard to believe, which is why I think this is one of the stocks that could crash 20% … potentially more.

Now here’s one of the stocks that could crash 20% or even 100% and I probably won’t get too much grief for it: Sino-Global Shipping America. Forget the fact that Sino-Global was founded in the U.S. or even the word America in the brand name. Its ticker symbol is SINO stock and that’s probably all some folks need to know.

Perhaps most disconcerting for these certain investors is that the company’s “principal geographic market is in the People’s Republic of China.” That’s probably not going to go over too well, even for rational thinkers. According to the Pew Research Center, unfavorable views of China have reached historic highs in many countries.

Frankly, the negative sentiment is worrisome given the explosive rise of hate crimes against people of Asian descent, not only in the U.S. — for some reason, ultra-liberal cities like San Francisco see the worst of these incidents — but throughout the world.

May I suggest a more productive way to channel your anger? Don’t actively invest in businesses that enrich Chinese commercial interests. Putting geopolitics aside, it seems SINO stock is technically very stretched. 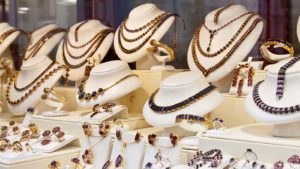 As a high-end jewelry play, I can appreciate why someone would criticize me for including Birks Group in this list of stocks that could crash 20%.

On one hand, BGI stock features a similar bullish narrative to Costco (NASDAQ:COST) in that both companies cater to the affluent end of the consumer demographic spectrum. And when you’re dealing with rich people, they tend to be the least impacted from economic concerns.

Plus, you have the incredible performance of BGI stock. Over the trailing one-year period, shares have jumped more than 730%, demonstrating incredible resilience in the face of turmoil. Nevertheless, I’m still skeptical, which is why I think Birks is one of the stocks that could crash 20% or more.

Yes, Birks is robust because of its core consumer base. But, on the other hand, rich people are not unaffected by this crisis. They just think differently than most people, leveraging the crisis to expand their wealth through real estate purchases and other key investments.

In other words, not all affluent folks are that way by birth. Many worked for their money — and they might not spend it on frivolous luxuries when there are so many other viable places to put that money to work.

Cassava Sciences represents a perfect example of how being bearish on a particular equity unit doesn’t necessarily mean you hate the underlying company.

In this case, we’re talking about a clinical-stage biopharmaceutical company focused on the detection and treatment of Alzheimer’s disease. I love the science and the passion. So, why is SAVA on this list of stocks that could crash 20%?

Simply, because it can. With SAVA stock, you must separate the science from the shares. Yes, no question exists that we’re all rooting for Cassava. Alzheimer’s is a terrible and debilitating disease and the sooner we get rid of it, the better. The thing is, you as an investor don’t necessarily need to put your money into it. Unfortunately, many pharmaceutical companies have attempted to address neurological conditions but with not-so-encouraging results.

That’s not to say that Cassava doesn’t have the magic formula waiting in the wings. It very well might. But just take a look at the technical chart for SAVA stock. Volume has been steadily declining since its early February pop, yet shares remain very elevated. I don’t think this lack of confirmation is a good sign.

As I write these words, Bitcoin (CCC:BTC-USD) is on the cusp of breaking back above $61,000. Because of the volatility of cryptocurrencies, a strong chance exists that mentioning these statistics will appear anachronistic by the time you read this.

You might think that with such enormous interest, I’m excited about BTC’s potential. From a long-term perspective, I am. However, with the rumblings in global markets, along with unprecedented fiscal and monetary actions, I’m anxious about pretty much everything. That includes crypto and especially crypto-mining-based investments like MARA stock.

For one thing, Marathon shares have made a mad dash to an over 8,200% gain during the trailing year. That is simply phenomenal, truly a type of speculative wager that could make you rich. But having increased so much, I believe the law of diminishing returns makes this play particularly treacherous.

That’s why I myself have a short position in MARA stock even though I’m long-term bullish on Bitcoin. Let me reiterate that I don’t hate the underlying company. But I do believe in rational thinking more so than the philosophy of diamond hands.

On the date of publication, Josh Enomoto held a short position in MARA and a long position in BTC.