This week, Microvision (NASDAQ:MVIS) briefly became the most-mentioned company on Reddit’s r/WallStreetBets subreddit. It didn’t matter that the 28-year-old firm had never seen a profitable year, nor that its lidar (light detection and ranging) technology lags years behind the competition. Every time a Reddit user posted their six-digit gains from MVIS stock, more people bought in. Over the past week, the firm rose 150% before dropping about a quarter. 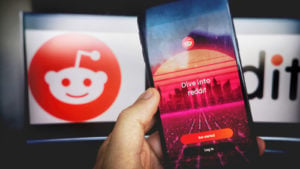 Meanwhile, short bets in the stock have ballooned. On Tuesday, traders sold 47.5 million shares short in a single day — a head-turning amount for a firm with only 156 million freely floated shares. Fee rates for shorting shares now stand at over 45%, according to data from Fintel, a financial aggregation firm.

These investors have a point to stay skeptical. Microvision’s hopes rest on its unproven track record in lidar development, a laser technology that dozens of companies have fought over. Its licensing revenue also looks set to shrink in the coming quarters. 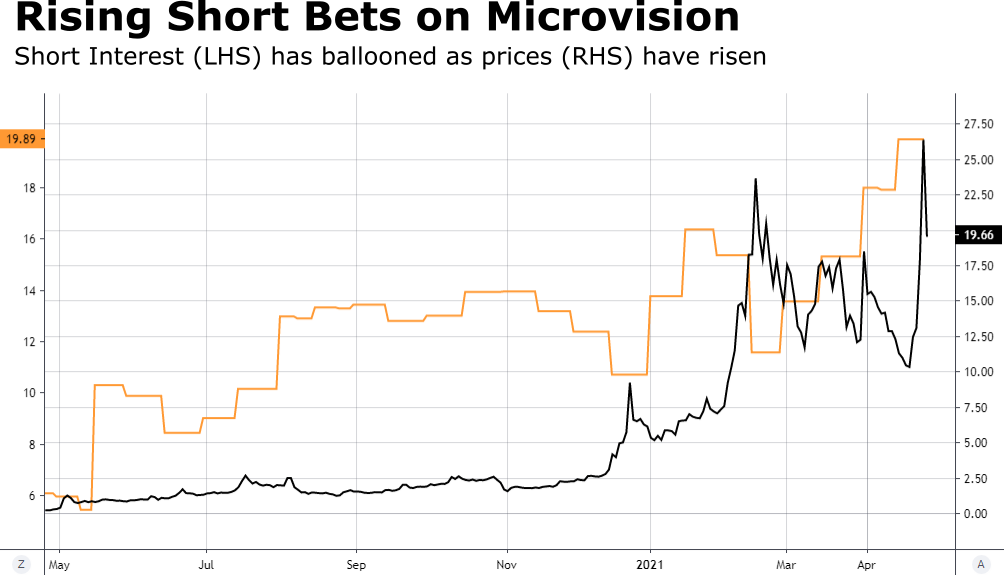 But when it comes to Reddit investing, none of that seems to matter. Why? Because when fellow Redditors are parading their well-earned gains in front of peers, there’s little stopping others from jumping in on fear of missing out, otherwise known as FOMO.

To profit here, investors need to play a different game. That starts with understanding how we got here.

Last week, insightful readers may have noticed MVIS stock start to inch up. Shares had fallen to as low as $10 after a March selloff. By Monday, though, shares closed at over $26.

As early investors started to post screenshots of their paper gains on the r/WallStreetBets subreddit, they created a positive feedback loop. The faster shares rose, the more people bought in and so on. By early this week, people were placing significant out-of-the-money call bets on the stock — a move that can easily trigger a gamma squeeze. This same playbook sent Gamestop (NYSE:GME) shares as high as $483 earlier this year.

The results would end up as expected. MVIS stock shot up as new FOMO investors started buying in. By Tuesday, Microvision had become one of the top-traded stocks after hours.

Wall Street, however, was still not convinced. Today, Microvision’s short interest percent sits at about 20%. As the gap between Main Street and Wall Street grows, investors on both sides will try to play each other for gains.

The Widening Gap: Story Over Substance

Wall Street analysts have long known the issues at Microvision. The firm started in 1993 to develop technology for displaying images “onto the retina of the viewer’s eye.” However, these early ventures into augmented-reality headsets failed to create a working commercial product. Later, Microvision’s management moved onto making micro-projectors, but fail to turn a profit from that as well. Since then, the firm has pivoted for a third time, with hopes now resting on lidar for autonomous vehicles (AVs).

But there’s just one problem: lidar is such an incredibly crowded field that even well-funded firms have gone bankrupt. For example, Israel-based Oryx Vision folded in 2019. Now, more companies seem set to follow.

Redditors, however, haven’t shown concerns. To them, reaching $100 is more important than understanding what Microvision is actually worth. It doesn’t matter that MVIS stock is now nearly worth as much as the combined value of Velodyne (NASDAQ:VLDR) and Ouster (NYSE:OUST), two of its close competitors. Nor is it noteworthy that Luminar (NASDAQ:LAZR), the dominant player in the field, has a multi-year head start.

And as for Intel’s (NASDAQ:INTC) Mobileye potentially releasing a lidar system for under $1,000? To them, it’s more important that MVIS is going up.

How to Play MVIS Stock

Most investors would do well to sit by and watch this multi-act comedy play out. Short sellers will likely win eventually, but margin calls and short squeezes can drive these investors out of business long before they can profit. Meanwhile, Microvision might yet stumble upon a world-beating lidar technology. And they’ll have no trouble selling it — legacy automakers have shown a willingness to pay up for firms with the right self-driving technology. As for their stock, Reddit investors have a habit of inflating good news to unimaginable levels.

That said, there will always be folks looking to profit from short-term volatility. If you’re one of them, here’s how that might work.

When Microvision reports first-quarter earnings this Thursday, investors should expect volatility to rise. The firm is due to update investors on its lidar program and such pronouncements can send a stock either skyrocketing or plummeting.

Currently, we don’t know which way MVIS stock will go (although there’s a good chance it is still years away from a breakthrough product). That makes going long volatility a compelling bet, particularly for strategies that involve long calls (strangles that involve buying one call and one put are a good example). These one-sided returns can yield 10-to-one payoffs for those who choose the right out-of-the-money strikes.

Choosing the right strike prices is also essential. Tuesday’s decline sent at-the-money calls down 54% while puts with the same strike rose just 37%. A simple straddle would have lost money; investors would have needed to use different strike prices (known as a strangles) to stay above water.

As the Gamestop short squeeze in January showed, it’s best to keep your distance when Wall Street and Reddit lock horns on a stock. It’s hard to know how high prices can go or how quickly things can unravel.

This year, solid-state battery developer Quantumscape (NYSE:QS) grew to a $50 billion market capitalization despite being years from profitability. Its stock has gone on to lose three quarters of its value. Similarly, profitless special purpose acquisition companies (SPACs) have raised billions for pre-revenue names. Churchill Capital IV (NYSE:CCIV) would have theoretically valued Lucid Motors at $105 billion (“theoretically” because CCIV reached that valuation before the merger terms were announced). Shares are down 65% since then.

MVIS stock has already earned its place among these high-flying companies. Its $3.2 billion market cap represents an over 1,000 times price-to-sales (P/S) ratio. But what comes next is an open question. All said, it’s better to play a different game when an all-out war is brewing in the underlying stock.

On the date of publication, Tom Yeung did not have (either directly or indirectly) any positions in the securities mentioned in this article.

Tom Yeung, CFA, is a registered investment advisor on a mission to bring simplicity to the world of investing.